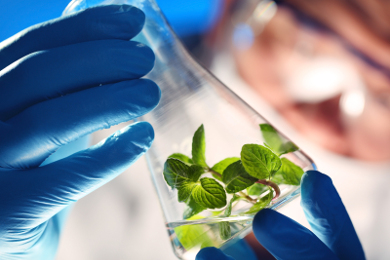 The concentration of nutrients in the plant is not fixed, but constantly changes. It may vary from month to month and even from day to day. The concentration of nutrients even differs between various parts of the same plant. In order to learn the rate in which a nutrient is absorbed, it is necessary to take samples from several plant parts at different growth stages. The most common uses of plant analysis are verification of visual diagnostics and identification of nutrient deficiencies or excess. Since there are many factors affecting the interpretation of plant analysis results, it is very important to take the samples correctly.

Samples should represent the general population of the plants, otherwise the results will be invalid and money and work invested will be wasted. The most important things to be considered in taking the samples are: The part of the plant sampled. The number of samples taken. Timing of taking the sample, i.e. the phenological stage of the plant. Samples should be taken from plants which are at the same physiological stage and from the same parts of the plants. It is recommended to avoid sampling plant tissues which are physiologically very young, since their nutrient content undergoes rapid changes.

Very old plant tissues are not representative as well. Younger tissues will contain more N,P and K, while in older tissues it is expected to find higher concentrations of Calcium, magnesium, manganese and boron. Plant analysis results of adjacent plants may vary considerably, even if the plants were fertilized at the same fertilizer rates. Under conditions of nutrient deficiencies, the variance between the plants is considerably greater. Interpretation of the results The nutrient content of the plant is expressed on a dry weight basis. Therefore, any condition that affects the dry weight of the collected sample will affect its nutrient composition.

From the lab to the field we have you cover! Talk to us today!

Talk to us today!

Need your water tested? We can help, find out how below!

We can be found in Gibbon, NE by the overpass on HWY 30!